Like last year, my final week in Tokyo was packed full with teaching, events, outings, and preparations for the last sessions of the teacher training. Keiko Tanaka, the director of Yoga Plus treated me to Kabuki. I’ve always wanted to see a live Kabuki performance and was really excited to meet her on a Tuesday morning at the newly re-opened Kabukiza in Ginza. I remembered all of the hoopla from last year’s unveiling of the newly remodeled theater and there has been a constant, steady stream of visitors since then. The original Kabukiza dates back to 1889 and has been rebuilt five times over the years due to fires and natural disasters.  Now towering sky- scrapers have blossomed up around it in the midst of bustling Ginza.

Our program for the afternoon started at 11:00 a.m. and consisted of the following: “Tsurukame” (The Crane and the Tortoise); “Terakoya” (The Village School); “Sannin Kichisa Tomoe No Shiranami” (Three Thieves Named Kichisa).  Two more programs would run throughout the day—2:40 p.m, and then 6:00 p.m. Tickets could be purchased for the entire day or for separate programs. 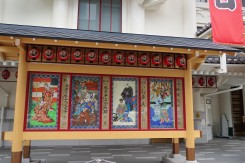 Once we entered the grand theater and found our seats I looked out over the serenely lit auditorium with a sloping ceiling.  Soon, the orchestra began to play as a boldly striped scrim lifted to reveal an expansive stage with a backdrop of an abstractly painted landscape.  Fortunately, I was able to get earphones with English commentators to help me follow along.  I discreetly tried to take pictures of the fantastic characters moving across the stage in grand kimonos, but only managed to get a few shots before I was promptly told to put my camera away.

At intermission, many people suddenly produced bento boxes and began to share lunch in their seats. Keiko and I got up and walked around surveying  the concession stands that lined the corridors and found some really delicious warm waffles filled with sweet azuki beans.  Black and white photos highlighting the lineage of great Kabuki actors adorned the hallways– all of them quite famous and known as household names. Keiko told me about some of her favorite actors and how much she loved Kabuki particularly the expressive acting, elegant costumes and sets. I certainly had to agree with her. 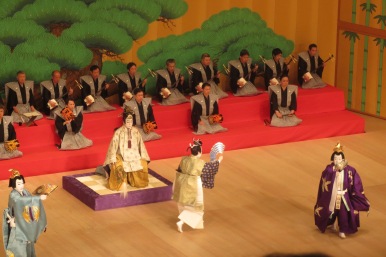 Kabuki which dates back at least 400 years, has been the primary form of popular theater in Japan and a venue to reflect fashion, cultural tastes, political and socio-economic trends of the time.  Many of the stories are part of a repertoire that actors memorize and perform routinely.  However, there are stylistic distinctions made with pieces associated to different periods over the years from the Edo and Mejii periods to the present.   Nevertheless, there have been long held traditions that apply to Kabuki. First of all, only men and young boys play a range of roles, from grieving mothers, wives, to samurai and emperors.  Male actors train for many years to perfect their impersonation of women which is called—“onngata.”   I will admit that it was impossible for me to tell that the female actors were in fact men!  However, there was a time when women did perform (early 1600s) and their provacative performances were later banned from the stage due to social morals enforced by the “shogunate “in 1629.  Young boys would systematically replace women, however, prohibition would routinely apply to them as well.  Ultimately, Kabuki flourished with older actors, all men depicting subjects on serious drama.

The costumes throughout all the programs were of course stunning and the actors wore them with graceful ease. The kimonos, which are made with the finest materials, can be quite expensive. I also found it interesting that men in complete black (kurogo), are always on stage,  blending into the background as they move sets and props or assist with costume changes. They sit huddled around on the sets or behind main characters, squatting or in other positions for long periods of time without flinching or twitching. I told Keiko that I couldn’t believe their physical discipline and stamina. We jokingly laughed and said, “Now that is yoga!”  The actors also had an impressive physicality that met the rigorous demands of their roles.  Elegant stage sets are austere and suggestive of real locations, but also engineered to move around, collapse or emerge in an instance. For example, in the “Three Thieves Named Kichisa,” a woman is tossed into an undulating river and drowns in the waves!

Live music is played with traditional instruments such as Japanese drums, shamisen, and flutes while members of the audience occasionally shout at the actors. This is another unique factor of Kabuki. The “presentational” stage action is directed towards the audience and they actors may actually be situated in or enter the stage via the audience. “Mie”—a strong pose struck by male characters to express a powerful emotion or conflict– is accompanied by loud beats of wooden clappers. Finally, spoken word, diction are also categorically stylized.

After seeing three shows that day, I appreciated the historical and cultural significance of Kabuki theater and felt so grateful for this generous gift from Keiko. It would take quite some time to see the breadth of performances and study the volumes of scholarly material written on the subject. But if you’re ever in Tokyo, you must make a special trip to the Kabukiza— you will have a rare and truly remarkable experience in the performing arts.

2 thoughts on “Kabukiza with Keiko Tanaka”