I taught in Yokohama two evenings a week during the month of April.  This journey would usually generate slight panic as I traveled far away from my familiar environment in Tokyo on a fast-moving express train packed with commuters.  On my first trip there, Chinatsu Ito, a bright and talented student in my Teacher Training and teacher at Yogaplus, led me–through a maze of stairs, escalators and tracks, starting with the JR Yamanonte Line in Gotanda, then changing trains in Shinagawa for the rapid Tokaido Line to Yokohoma.  Once we finally reached our destination, Chinatsu gave me more instructions directing me to the studio on a hand drawn map then left me with these parting words… “don’t get lost!”

Each of these massive subway stations—Shibuya, Shinjuku, Shinagawa, or Yokohama, are entire macrocosms overflowing with stores, restaurants, stalls for every type of goods, and throngs of people moving at a frenetic pace, never seeming to slow down. The surrounding areas outside of the ungainly Yokohama station were flanked with monolithic department stores, intimidating in scale and densely occupied by hordes of people.

Yokohoma a marine city with a busy port, is the second largest metropolitan area in Japan.  The city has a long history of foreign trade, primarily with Great Britain; immigration from China and Korea; and occupation by Americans after WW II.  I didn’t have a chance to see the greater metropolitan area or those that reflected distinct Western influences, but did manage to get to the “dazzling” Chinatown which will be highlighted in the next post.

Yogaplus in Yokhoma is an inviting place with a great group of students who were always fun to teach.  The studio is managed by  the gracious and energetic Kosai Kato who was also my translator for classes in 2012 and the 2013 TT.  Once I made the long journey to the studio, I always felt at home.

One of the students, Yoko Ito, would occasionally walk me to the train station after class, pointing out a wonderful bakery in the subway that would mark down their goods just as I was heading home around 9pm.  I would buy an assortment of tasty bread and pastries to get me through the weekend and catch the train and make it back to Gotanda around 10pm. 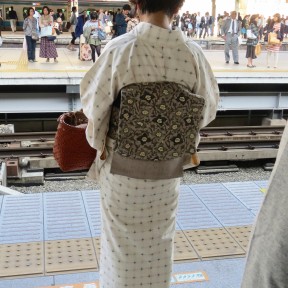 4 thoughts on “The Train to Yokohama”